Thanks to your support and many partners, we have reached the halfway point to planting 313 little libraries in Detroit!

To mark the occasion and continue momentum, we are gathering to celebrate and raise funds on Thursday, June 9, from 5:30-9 p.m. at the Tangent Gallery, 715 Milwaukee Ave., in Detroit's New Center area.

During the evening, patrons will have an opportunity to sponsor a Little Free Library - including one of the 13 very special libraries that were transformed by local artists --  on display most recently at the Mobile Homestead at the Museum of Contemporary Art and soon to be planted in the community.

We'll also offer a Detroit-themed silent auction which will feature a night's stay at the Inn on Ferry Street  a package for two at Westin Book Cadillac Detroit; a tour for 20 and 1-year membership with Pewabic; a Detroit Library with books by local authors; a Detroit History Tour, gift cards to several local restaurants, tickets to sporting events, family passes to the State Fair, massages, bottles of wine, Detroit jewelry, doggie day care, yoga with kitties, local chocolates, flowers and of course homemade ice cream!

Local merchants generously donated these items so we can raise funds to build more Little Free Libraries in Detroit!

Our work over the last 18 months has prompted the city of Detroit to begin working the little libraries into 40 parks slated for renovation over the next 18 months - where residents said they wanted them in their neighborhoods. Meanwhile, communities such as Romeo, Rochester Hills, Grosse Pointe and Pleasant Ridge are putting them in neighborhoods, too.

We live in an era when most of us are distracted by smart phones and tablets. But we believe the planting of 150 little libraries in Detroit with our partners has renewed interest in reading, and build community.

Another important reason we keep planting little libraries in Detroit: There's only one book for every 37 preschool children in Hamtramck, and one for every five children in Detroit's University District neighborhood, according to a recent academic study by a former University of Michigan professor.

Meanwhile, many Detroit schools no longer have libraries and some public libraries have shuttered or scaled back hours. Additionally, transportation and financial issues can hinder residents' access to reading materials.
Please help us bring more Little Free Libraries to Detroit so we can bring more books to neighborhoods.

Until then, Viva Libris!

Detroit Little Libraries is a grassroots campaign working in partnership with the national Little Free Library, a 501(c)(3), to promote reading and community in Detroit through the take-a-book, leave-a-book movement known as the Little Free Library. 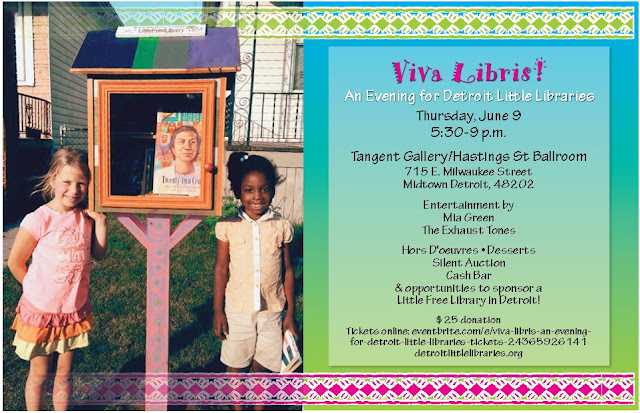 Posted by Sylvia Hubbard at 8:18 AM