How to Write a Good Book in 30 Days VIA @jfbookman

ARTICLE: How to Get Major Companies and Nonprofits to Sponsor The Promotion of Your Book @aBookPublicist

"How to Get Major Companies and Nonprofits to Sponsor The Promotion of Your Book”
Hi Sylvia,
Scott Lorenz of Westwind Book Marketing.
What if in less than 18 months, you could accomplish the following without spending one red cent of your own money?
Have a major PR firm representing you and getting you booked on...
* ABC World News
* National Public Radio (NPR)
* Oprah & Friends
* 63 major radio stations
And then...
What if companies like Coca-Cola, Wachovia, Yahoo, Toyota, Sony Pictures plus other Fortune 500's and leading non-profits offered to...
•           Buy 50,000 copies of your self-published book every year
•           Make it possible for you to get $500,000 in advances for your next book,
•           Pay you fat speaking fees for 65 speaking engagements
•           Give you testimonials from their CEO
•           Send emails to 100,000+ of their customers or volunteers promoting your book or business
•           Feature you on their website and guarantee you'll get at least 5 million impressions.
Is the above a fairy tale?
Can it REALLY happen ... especially if you're not already famous?
It already has for Brendon Burchard, an author and speaker who's figured out some really ingenious ways to land corporate and non-profit promotional sponsorships and use them to fund his marketing efforts.
To discover how you can use his methods to promote your own book, product or business, you're invited to a free telephone seminar on Thursday, October 24th in which you'll hear Brendon interviewed by Steve Harrison:
http://j.mp/1i7jVmZ
In the interest of full disclosure, you should know I'm a compensated affiliate for Steve's programs. Here's just some of what you'll learn on Thursday's call with Steve and Brendon:
•           What to do step-by-step to get a major company to sponsor your national promotional tour and pay for everything!
•           Why the current economic downturn means more big companies and non-profits sponsoring authors, speakers and entrepreneurs -- even if they're not famous.
•           A website you can use to find potential sponsors and promotional partners.
•           The "secret phrase" which gets big nonprofit organizations to endorse your book and promote it to their members.
•           The title of the BEST person to contact with your proposal and why you should never send one done with Microsoft Word.
•           The #1 fatal mistake to avoid making when trying to land a deal a sponsorship deal with a Fortune 500 company.
•           How to write a short proposal that gets huge companies to sponsor you -- even if you're an unknown, self-published author (HINT: there are five elements and he'll reveal all five on the call.)
and more!
Again, to sign up for Thursday’s call go here now: http://j.mp/1i7jVmZ
One more thing Sylvia, if I can ever be of service to you in the promotion of your book please contact me.

Be sure to check out my new article below about Authors: Use Alliteration for Illumination of Your Book Title.

Authors: Use Alliteration for Illumination of Your Book Title
By Scott Lorenz
Westwind Communications


Alliteration is a very useful literary tool. Alliteration is simply defined as the occurrence of the same letter or sound at the beginning of adjacent or closely connected words and also the repetition of an initial consonant sound, as in "a peck of pickled peppers." Incorporating alliteration into your book title can help people remember your work and it will stick out in people's minds. Here are a few examples of books with alliteration in their titles:
The Teeny Tiny Teacher by Stephanie Calmenson
The Magical, Mystical, Marvelous Coat by Catherine Ann Cullen
Of Mice and Men by John Steinbeck
A Tale of Two Cities by Charles Dickens
The Great Gatsby by F. Scott Fitzgerald
Pride and Prejudice by Jane Austen
Sense and Sensibility by Jane Austen
Love's Labor's Lost by William Shakespeare
The Pickwick Papers by Charles Dickens
The Princess and the Pea by Hans Christian Andersen
Fahrenheit 451 by Ray Bradbury
Caesar and Cleopatra by George Bernard Shaw
The Wonderful Wizard of Oz by L. Frank Baum
Tinker, Tailor, Soldier, Spy by John le Carré
The Wind in the Willows by Kenneth Grahame
Roger Parker of personalbrandingblog.com explained on his website, "Sometimes the most important lessons in personal branding are the simplest ones, like using alliteration, or repeated “hard” sounds, to make the title of your brand-building book stand out and be easy to remember." You want readers, fans, and your potential audience to enjoy your book's title. Alliteration can help that title roll off the tongue nicely. If your book's title is memorable and fun or easy to say, people will talk about it. The alliteration will stand out in conversation or in the review section of a website.
According to Mike Ball, author of 'Banjos, Boats and Butt Dialing', alliteration can be a very effective  tool for a humorist. Ball explains, "I rarely use it for serious subjects but judiciously used, alliteration is an author's best friend. Since humor is all about timing, alliteration forces the reader to participate in the timing you are trying to set up. That's why my book title 'Banjos, Boats and Butt Dialing' gets people to laugh before they crack the cover."
As J.R.R. Tolkien observed, alliteration "depends not on letters but on sounds." Thus the phrase know-nothing is alliterative, but climate change is not."
Domey Malasarn from the website "The Literary Lab" feels that alliteration can belong in titles as well as within your book. "I have used it on occasion myself in places where I thought it was helpful. For example, if I had a sentence like 'Alfred was furious.' I might revise it to "Alfred was angry." because to me it pairs the subject of the sentence with his emotion a little more powerfully."
Puja Lalwani of buzzle.com explains, "The importance of alliteration should not be undermined as just another literary device that is beyond comprehension. It is highly useful and most invaluable, whether just to drive a point home, make for a fun read, or as a marketing tool that will leave your product etched in the mind of the consumer."
On the website, helium.com, Stella McIntyre perfectly outlines the benefits of using alliteration across various mediums. "Although most commonly used in literature, most particularly poetry, alliteration can also be found in non-fiction writing: leaflets, newspaper headlines, advertising and merchandizing. Its effect is twofold. Firstly it draws attention to and emphasizes a phrase and secondly, it can create connotations that significantly add to the understanding and enjoyment of a writer's meaning."
The Bottom Line: Alliteration in book titles will help people remember your book title because it will help your work stand out and engage your reader before they even open your book.

About Book Publicist Scott Lorenz
Book publicist Scott Lorenz is President of Westwind Communications, a public relations and marketing firm that has a special knack for working with authors to help them get all the publicity they deserve and more. Lorenz works with bestselling authors and self-published authors promoting all types of books, whether it's their first book or their 15th book. He's handled publicity for books by CEOs, CIA Officers, Navy SEALS, Homemakers, Fitness Gurus, Doctors, Lawyers and Adventurers. His clients have been featured by Good Morning America, FOX & Friends, CNN, ABC News, New York Times, Nightline, TIME, PBS, LA Times, USA Today, Washington Post, Woman's World, & Howard Stern to name a few.
Learn more about Westwind Communications’ book marketing approach at http://www.book-marketing-expert.com or contact Lorenz at scottlorenz@westwindcos.com or by phone at 734-667-2090. Follow Lorenz on Twitter @aBookPublicist

Posted by Sylvia Hubbard at 3:00 AM No comments: 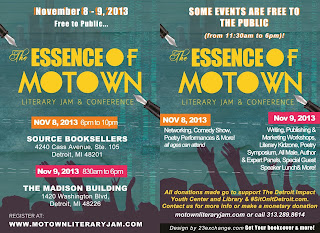 Posted by Sylvia Hubbard at 10:32 AM No comments:

The Freelance Marketplace Writers' Groupmeets Tuesday, October 15, 2013 at 7:30 p.m. at the Rochester Hills Barnes & Noble Bookstore to discuss the Business of Writing. Our topic this month will be networking with other writers. We meet monthly (except in December) on the third Tuesday of the month. It's free and open to new, working and published writers, photographers and illustrators.

Michigan Press WomenPresents "How to build your best-selling book" on November 16, 2013 at the Michigan Library and Historical Center in Lansing from 10:00 a.m. until 4:00 p.m. $60 registration fee. Visit www.MichiganPressWomen.org for more information.

Posted by Sylvia Hubbard at 10:25 AM No comments:

o/t: Zazzle Poetry Helps You Wear Your Heart on Your Chest via @mashables

Posted by Sylvia Hubbard at 10:24 AM No comments: