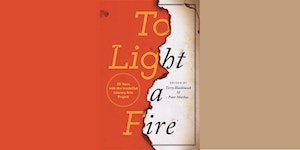 Please join InsideOut Literary Arts Project, Wayne State University Press, and The Scarab Club on September 3, 2015, at Detroit’s historic Scarab Club, in celebrating the publication of Terry Blackhawk and Peter Markus’s To Light A Fire: 20 Years with the InsideOut Literary Arts Project.
The InsideOut Literary Arts Project began in 1995 in five Detroit high schools. Twenty years later, the program serves some five thousand K–12 students per year, has received national exposure and accolades (including a recent visit to the White House), and has seen numerous student writers recognized for their creativity and performance. In To Light a Fire, founding director Terry Blackhawk and senior writer Peter Markus collect the experiences of twenty-three writers like Jamaal May, John Rybicki, Robert Fanning, and francine j. harris, who have participated in InsideOut over the past twenty years to give readers an inside look at the urban classroom and the creative spark of Detroit’s students.
2011 Kresge Eminent Artist Bill Harris will kick off the evening, followed by remarks from Blackhawk and Markus about what it was like compiling twenty years into one book. Singer-songwriter Audra Kubat will perform throughout the evening.
Books will be available for purchase and signing. Complimentary wine and light appetizers.
Parking is available in the Scarab Club lot. Overflow parking is available in the DIA lot for $7.

Terry Blackhawk is the founding director of InsideOut Literary Arts Project and a widely awarded educator as well as a poet. She is the author of two poetry chapbooks and four full-length collections of poetry including Escape Artist, winner of the John Ciardi Prize, and The Light Between (Wayne State University Press, 2012). She was named a Kresge Arts in Detroit Fellow in Literary Arts in 2013.

Peter Markus is the senior writer with the InsideOut Literary Arts Project. He is the author of the novel Bob, or Man on Boat, as well as five other books of fiction, the most recent of which is The Fish and the Not Fish. He was named a Kresge Arts in Detroit Fellow in Literary Arts in 2012.

Posted by Sylvia Hubbard at 6:00 AM